October 1, 2018 by Chandra Sekar Venkataramani Comment Closed
The cost of public transportation in many major European cities, can very quickly empty one’s pockets. So, if you are someone looking to explore the cities of Europe, and keen to do so with minimal expenses (typically students), then Free walking tours can be very handy. Usually an extensive narration of the city’s history along with a tour of the key landmarks, these walking tours save one the trouble of having to plan quite extensively yet explore a lot.

My first experience of a free walking tour was at Strassbourg, a city in the eastern part of France (called the Alsace Region). Located not far from the Rhine river which separates the German-French border, one can arrive here from Germany by train (typically French high-speed TGVs or the German ICEs/ICs) as well as by intercity bus services from operators such as FlixBus. The city has repeatedly come under German rule in the past and the effects of this is quite noticeable. Owing to this and the European Union’s relaxed border controls, it would be no surprise if one momentarily forgets being in a different country. There is even a tram which operates between Strasbourg in France and Kehl in Germany across the Rhein river. One can also cycle or walk across the bridge/border. 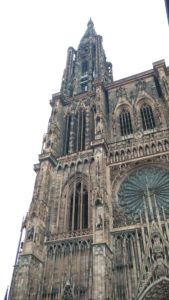 The tour starts from the Strasbourg Cathedral and it is easy to notice the sign ‘Happy Strasbourg Tours’ on top of a staff peeping over all heads. The tour guide Gabriel is a local and yet spoke English with hardly a trace of the French accent. Our guide was cheerful, interactive and fun to listen to. He did not pass an opportunity to direct jolly remarks at the Germans in the group. Yet when he went on to narrate the story of the World Wars, he was sensible enough to convey the city’s history without causing the slightest discomfort to the participants. No booking is required to participate in the tour. The walking is steady-paced and covers a distance that is unlikely to tire one out.

The free walking tour at Nuremberg from Dorian, a local student who offers the tours on specific days, turned out to be a diverse group with many American tourists signing up for the tour. Considering the large number of participants, it is recommended to sign up for this in advance. In a sarcastic yet subtle manner, Dorian was prompt in conveying how Nuremberg losing its importance as an independent province and being sidelined by Munich after annexure to the Bavarian region, remains a cause of contempt among the locals. (Such history trivia are more relevant for sports fans, typically Football).

Part of the tour guide’s narration was about the last rally of the Nazis in the city before WW2 was officially declared, the Nuremberg trials that followed post war and how the city subsequently also became home to a monument dedicated to Human Rights, which in later years paved way to the United Nations’ Universal Declaration of Human Rights. Dorian mentioned about the underground beer cellars of the city saving many city residents, including his own grandfather, from the bombings of WW2 and attributed it as yet another reason to drink beer. 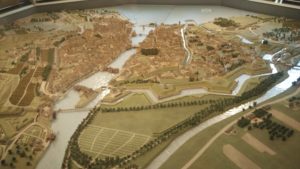 A scaled version of older Zurich

The third free walking tour in Zurich’s Altstadt turned out to be more tiring with unluckily a summer heat wave raising mercury levels over most of western Europe in early August. Still the free drinking water available at the numerous fountains of the city turned out to be a huge relief. The story about how watches were the only ornaments allowed to be worn by the church a few centuries ago ultimately leading to today’s world famous Swiss watch brands was unique.

As an additional tip, since it is possible that Euros may not be accepted everywhere, holding a mutli-currency travel card to withdraw Swiss Francs can prove helpful.

Despite being a free tour, all the tour guides were quite dedicated, well-planned, punctual and had a good sense of humor making the tour as worthy as a paid one or even better. After the tour, the guides are ready to offer travel advice or recommend shops/restaurants/things to do without coercing anyone into particular choice.

And of course while it is free, participants are welcome to tip the guides willingly at the end of the tour based on how satisfied they were. Be assured that the guides will not force participants into tipping them. So rather than paying for a tour and then questioning its worth, here its about undertaking the tour and paying for the performance, if interested to. To me, it sounds reasonable and even perhaps along the lines of The Bhagavad Gita about doing one’s karma and accepting whatever maybe the outcome.