The Schwarzwald (English: Black Forest) located in Baden-Wuerttemberg, the south-western state of Germany, is a name constantly repeated by travel and nature enthusiasts. Even by food lovers, who love to occasionally enjoy a Black Forest cake.

The onset of warmer days from May to August/September is a welcome call for Trekkers in Germany. While having never really trekked in the past myself, the ad I spotted accidentally in the local newspaper (benefits of reading German) sparked a thought to sign up for one. The ad spoke of a local club organizing a one-day Trek starting at Durmersheim, a town located 8-10 kms south-west of Karlsruhe, and invited even non-members to join if interested. 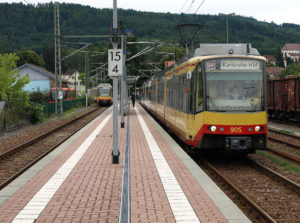 Couple of weeks later, we were all boarded on the local train (called ‘Murgtalbahn’ informally, meaning the train that runs in the valley of the river Murg. Hint: Geographical features and City/town names are very closely linked). In a group of 30 odd people, I was the only Indian and perhaps the youngest at 26 years of age, with the oldest German gentleman in the group being 80. Turned out to be a good listening practice for me in German, listening to different accents.

After a hour and half of train journey that too us through scenic hilly landscapes and over picturesque railway bridges, the group disembarked at Baiersbronn. It was followed by a walk into the woods along steep paths listening to the dried leaves crunching under the feet birds chirp and occasionally passing the narrow streams. A keen listener might quickly begin to enjoy this Symphony of Nature. 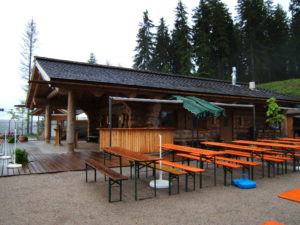 5 kms later, the Glasmaennlehuette Restaurant was reached where we halted for lunch and to enjoy the grand view. One can expect to try Oma’s (Grandmother’s) cake and other regional specialties (of course Beer too) here. The Schwarzwald region is supposed to be home for the highest-rated restaurants. The Restaurant is located 777 m above sea level and is built entirely in wood.

There are numerous sign boards guiding trekkers, but for a first-time a ‘been here, does this’ local/regular trekker is handy. On my second trek to the same spot 2 months later, I could make out my way just with the sign boards with ease. The ‘cable chair’ is another way to make one’s way up or down. Well-established mountain biking trails are also to be found. 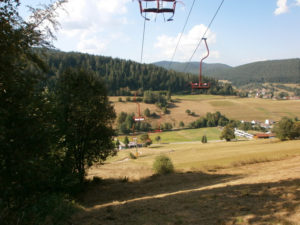 Traveling with a German group, I got to experience many flavors of Germans. Most of us tend at first to associate our own or ones we have been told (on many occasions limited) experiences to a certain nationality/ethnic group. And meeting people of all kinds refines this understanding. Complaining about taxes being high and trains being late is part of small talk here too. After a while, one tends to see the commonalities and then on its never a foreign land or group. Just the finer details, the local traditions and circumstances are different.

Rain in the afternoon delayed the return stint of our trek. Following the weather forecasts, which are updated at a hourly frequency or more, didn’t still help precisely foresee the downpour. But even slightly slippery paths didn’t seem to slow down or rob the oldest members of the group off their energy. On the contrary, they only seemed to grow in strength and were bustling with activity.

Post trip, the understanding was to pay the club for the travel charges. And guess what? The club decided to waive it off for everyone, members and non-members. So, at the end I had had a guided trek plus a refresher course in German listening and culture, all for free. I doubt if it can get any better ! But as a tip for the reader, I would recommend the regional Baden-Wuerttemberg ticket. Fits better if traveling as a group.

It is important here to note that the Schwarzwald is a natural forest region spanning several kilometers, so not every ‘visit to the Schwarzwald’ is the same as another. In general, it’s a getaway from the crowded (?) human settlements and everyday routines of life to experience something different in nature that’s been preserved to a large extent. Ofcourse there are those who live and work here in Schwarzwald. I wonder if they still manage to see it in new perspectives once a while.

After watching the landscape rich in lustrous green twice, I think I might again visit in winter to watch it painted in snow white.